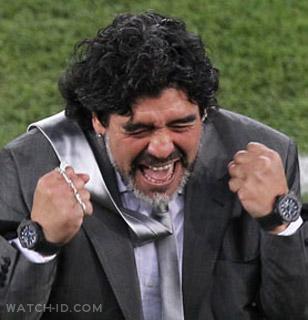 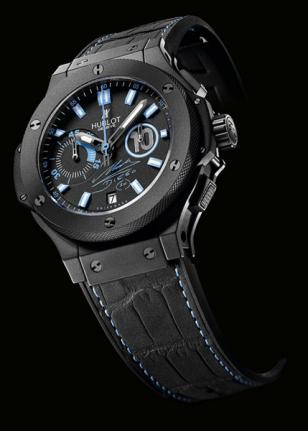 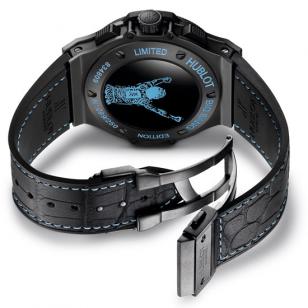 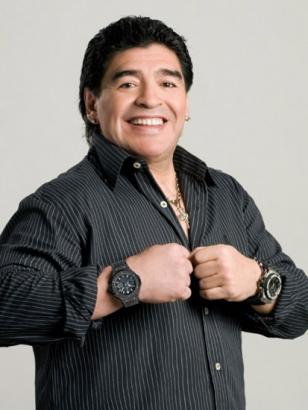 During the FIFA World Cup 2010 in South Africa, Hublot was a sponsor and the brand released a limited edition version of the Big Bang dedicated to soccer legend Diego Maradona.

And who better to promote this watch than... Diego Maradona himself. The soccer hero wore two Hublot Big Bangs (one on each wrist) during each game of the tournament.

The Hublot Maradona Big Bang Chronograph is 44.5 mm in diameter, and is composed out of black ceramic, microblasted for texture. A sapphire crystal covered a black dial face, adorned with Argentine blue and white in luminescent on numerals. Maradona’s jersey number, 10 in Mexcellent font is inscribed on a sub-dial around the 3 o’clock position, while an etched version of his signature is on the dial’s 6 o’clock position. The watch features Hublot's HUB1146 chronograph movement with 55 jewels and 42 hours power reserve. The black ceramic case back has an image of Diego Maradona with his arms up in victory. A luxurious alligator band reinforced with rubber back and Argentine blue stitching further accentuate the timepiece.

The Maradona Big Bang was a limited edition of only 250 units made, which all sold out very quickly during the FIFA World Cup 2010.