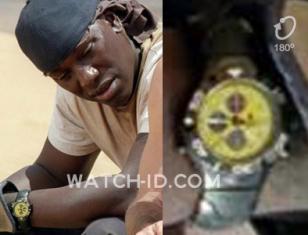 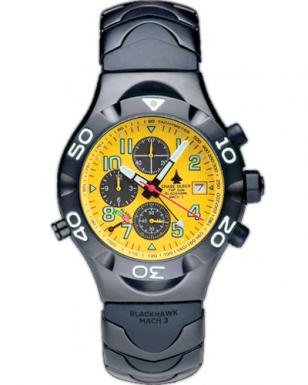 This high tech pilot's watch is a fitting watch for Gibson's character in the film (A.J. is the copilot of Captain Frank Towns played by Dennis Quaid) and is loaded with features, including a three dial chronograph for precise timing, built-in alarm, date window and Superluminova illumination system on the hands and numbers. Solid stainless steel case and hardened mineral crystal face is waterproof to 330 ft. Designer rubber band with silver reinforcements and push-button buckle is also waterproof and extremely tough. The watch is qute small, the face measures 38mm and is 12mm thick.

Chase-Durer was formed a decade ago by Hollywood film producers Brandon and Marianne Chase. The company structure was based on the need for realistically-priced, top quality Swiss Watches specifically directed to the needs of professional pilots, both civilian and military. See more Chase-Durer sightings here.

The Blackhawk Mach 3 is available in many different color combinations and retails for about $299 on the official Chase-Durer website or find this watch on eBay.