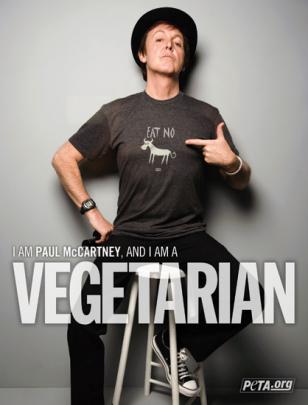 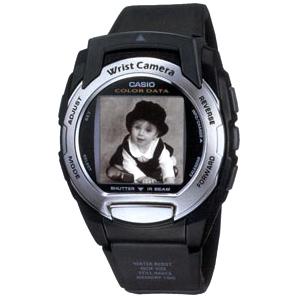 Sir Paul McCartney is an avid vegetarian and spokesperson for The People for the Ethical Treatment of Animals (PETA) Foundation, a UK-based charity dedicated to establishing and protecting the rights of all animals. In an advertisement for PETA, McCartney wears a Casio WQV3-1BNDL watch with color camera. He wears the version with black band. The watch was also available with metal band, modelnumber WQV3D-8BNDL.

About the Casio WQV3 Wrist Camera
A 25,344-pixel color CMOS sensor makes it possible to capture up to 80 full digital images that can be transferred to a computer via infrared, displayed in full color, or e-mailed to friends or family on the web. The images will be shown on the watch screen in monochrome color, but if you transfer them to the computer you can see them in color.

The Casio Wrist Camera Watches packing a CMOS monochrome image sensor into a super compact and lightweight configuration. Its ability to snap monochrome digital images any place and anytime, made the Wrist Camera watch a popular hit the world over. Since then, there has been a demand for a new version capable of recording images in color.

A built-in 16-grayscale monochrome LCD panel acts as both the viewfinder and an on-the-spot playback monitor. Enough memory capacity is provided to store up to 80 images and infrared data communication. These Wrist Camera watches also feature 5 alarms which can be set up to display a specific digital image when each alarm time is reached. Images can be transferred to a computer and viewed by using the Wrist Camera internal software which enables the image to be viewed in 16.77 million colors on your PC. A library of images can be stored onto your desktop, transferred back to a Wrist Camera, or e-mailed to friends.

Read a review about the Casio WQV3 watch on geek.com.

PETA T-Shirt
The "Eat No Animal" t-shirt that is worn by McCartney in the advertisement and also in in the video for his song "Nod Your Head" is available at the PETA website.