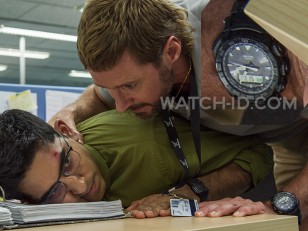 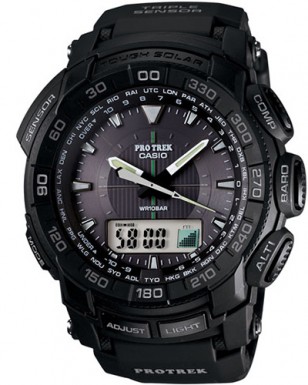 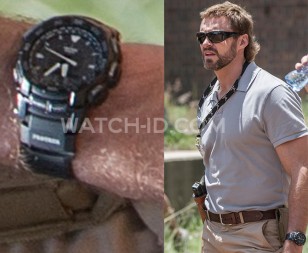 Chappie is a science fiction movie about a robot police force directed by Neill Blomkamp who also made District 9.

The PRG550-1A1 with black resin band and black face worn by Hugh Jackman is one of the most advanced Casio watches. It is a 3 hand analog watch model with an LCD window. The triple sensors measure compass bearing, altitude/atmospheric pressure and temperature. The multi-purpose second hand points towards magnetic north and can indicate the latest change in atmospheric pressure or show a change in altitude from a pre-selected location, depending on the function selected.

While the LCD displays numerical sensor information such as compass direction angle value, altitude, atmospheric pressure, and temperature, the PRG550-1A1’s full auto LED light activates with just a flick of the wrist and operates by Casio’s Tough Solar Power technology, allowing readings to be accomplished with ease.