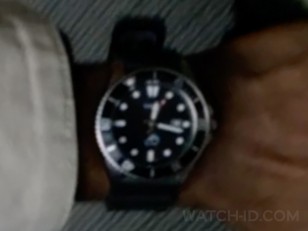 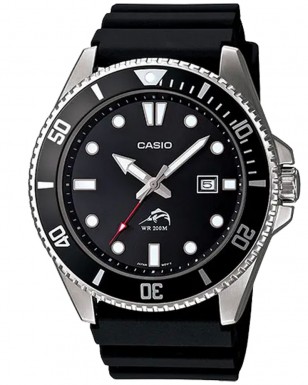 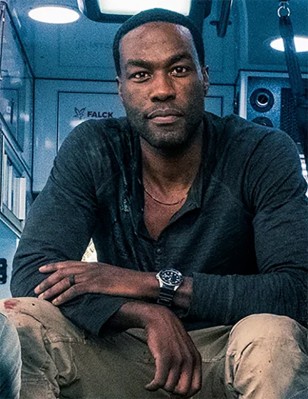 Yahya Abdul-Mateen II wears a Casio MDV106-1A Duro wristwatch in a behind the scenes photo of the movie Ambulance.
photo ©
Universal Pictures

This Casio has become a very popular affordable diver's watch.

The watch has a black dial, black bezel with diver timing indicators (15-minute marks, 10, 20, 30, 40, 50) and a small date window at the 3 o'clock position. The dial features the Marlin that Casio uses for watches that have are 200m water-resistant. The hour markers and hands and the small dot at the bezel have a lume. The Duro comes on a black rubber strap.

The Casio MDV106-1A is available for only $50 on Amazon or you can find them on eBay for $45 - $60. Also available in other colors: with gold accents or blue/red bezel. Note that the case is fairly large at 44mm, larger than it looks in the product pictures.

Ambulance is a new action thriller film directed and produced by Michael Bay. The film stars Jake Gyllenhaal (who wears a yet unidentified steel and gold wristwatch), Yahya Abdul-Mateen II, and Eiza González and follows two adoptive siblings turned bank robbers who steal an ambulance occupied by a paramedic and a police officer in critical condition.

This is the second watch sighting on Yahya Abdul-Mateen II, after we saw him wear a Hamilton watch in The Matrix Resurrections just last month.