The face of the Casio G-Shock DW6900-1V worn by Tom Cruise in Mission: Impossible II has been (digitally?) altered.
photo ©
Paramount Pictures 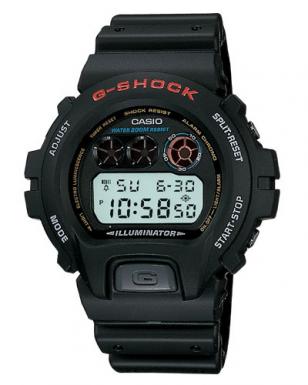 The watch has been digitally or actually modified, for example the Casio, G-Shock and G markings have been removed, see the screenshot on the left. Also, extra 'features' have been added to the digital screen, which on the actual watch don't exist.

This G-Shock watch features shock resistance, 200M water resistant, countdown timer, 1/100 sec. stopwatch and auto-calendar. The watch in the film has a black resin band with neutral face (model number 1V) but is also available in other colors.

The Casio G-Shock DW6900 watch is still popular and widely available, for example on Amazon.com, Amazon.co.uk, or eBay.