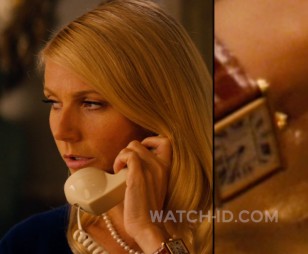 This $10,200 watch has a red or brown alligator-skin band, white dial with roman numerals and date window at the 3 o'clock position, it's probably model number W1529756.

Worn by Louis Cartier himself, the "Tank Louis Cartier" watch sets the standard for all Tank watches. To embody Louis Cartier's contribution to "modern style", later known as Art Deco, the tops of the lugs were rounded in contrast to the previously fashionable rectangular form and proud lines.

Buy on Amazon.com
Buy on JomaShop.com