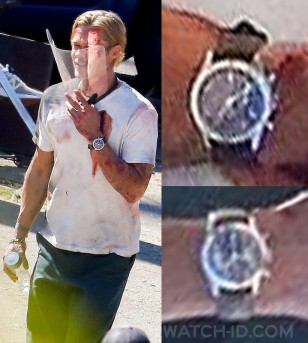 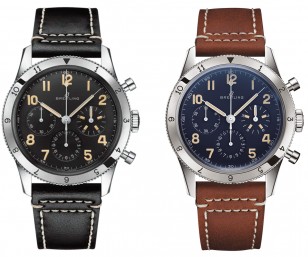 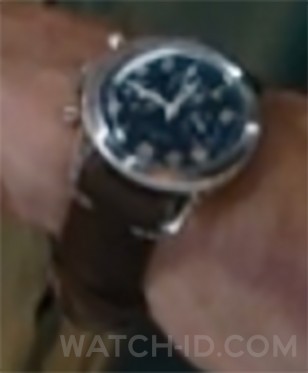 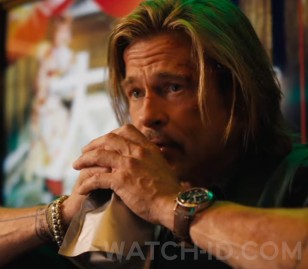 It also look slike Brad has a custom brown leather strap on his Breitling AVI watch in the film..
photo ©
Sony Pictures Releasing

Brad Pitt wears a Breitling Chronograph wristwatch with a steel case and black strap in the movie Bullet Train (2022).

Brad Pitt is a brand ambassador for Breitling since 2019.

Based on the spy shots from the film set (see images on the left) my first guess was that it's a Breitling Super AVI B04 Chronograph GMT 46 Tribute to Vought F4U Corsair, ref AB04451A1C1X1, with blue dial, steel case and dark (brown?) strap.

The steel case, shine of bezel, the dark dial, subdials and the shape of the buttons and crown lead me to believe that this is the Breitling AVI.

But in a better image from the film more details can be spotted and another match is the Breitling AVI Ref. 765 1953 Re-Edition, with steel case and black dial ($8,600) or the platinum model with blue dial ($39,900), see pictures on the left.

If we get more images from the film we can maybe confirm this.

Brad Pitt also wears a watch in the 2022 movie The Lost City in which he makes a cameo appearance, but not enough images are available to ID that model.